The published study is a series of punchlines -- but they aren't funny.

Al Lewis
September 19, 2014
Image
There is a saying:  “In wellness, you don’t have to challenge the data to invalidate it. You simply have to read the data. It will invalidate itself.” Nowhere is this truer than in the University of Pittsburgh Medical Center’s (UPMC) wellness program, results of which were just released in the October issue of the American Journal of Preventive Medicine, a journal that functions largely as the wellness industry’s house organ. All you need to do is read UPMC’s own words to learn that nothing happened in its wellness program. According to the article, over the course of the five-year study: “The proportion of low-risk members increased by 2%.” Two whole percentage points! After penalizing employees thousands of dollars ($2000 in 2011 alone for employees on the family plan) to compel them to submit to blood draws and other screens and answer very personal questions on health risk assessments, 2% was all they had to show for it? I hear a few people saying: “Wait a second, Al, you said nothing happened. They did get a 2% increase in low-risk members. While trivial, that is not literally nothing.” Well, first, it wasn’t really 2%. UPMC has 55,000 employees. But by the time they culled out everyone who didn’t meet the various requirements of participation, they were down to 13,627 people. Hence this entire conclusion was based on roughly 272 people reducing a risk factor. UPMC is the largest private-sector employer in Pennsylvania, a healthcare company that presumably knows a thing or two about health, and a major proponent of wellness programs. Yet all UPMC could manage after five years and millions of dollars was to reduce risk for 272 people.   Some Punchlines This self-admitted trivial risk reduction performance is not even the punchline. Usually there are three punchlines in these situations. The first punchline is usually that even though the results were uninspiring they were also overstated because the perpetrator left out both non-participants and dropouts from the analysis, which of course UPMC did. Because dropouts and non-participants typically have worse risk factor performance than participants (which is often why they drop out or decline to participate), it’s likely that the risk factor deterioration of the 41,000 employees left out could easily have more than offset the aforementioned improvement by the 272 people. The second punchline is that UPMC “matched” participants against a passive reference group of non-participants, a study design sleight-of-hand that is an excellent way of locking in savings. The reason that methodology is loading the dice is that a passive reference group (people who are matched “on paper” because their claims files happened to be available) are never given the chance to decline to participate, or to participate and then drop out. Hence the control group is not comparable. That would seem like common sense, and it is, but no need to rely on common sense. Another wellness vendor, Health Fitness Corporation (HFC), admitted the problem. As you can see on the slide below, HFC’s would-be participants improved vs. the reference group in 2005 by 9%, even though the program didn’t start until 2006. 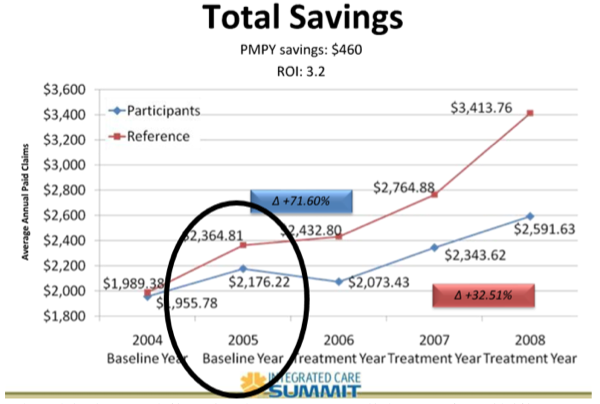 The third punchline is that UPMC didn’t “plausibility-test” its results by seeing if wellness-sensitive medical events – like heart attacks -- declined for the population over the period. Most companies that don’t do this analysis, like Pepsico, say that they didn’t track wellness-sensitive medical events because they didn’t have access to the event rate data. But obviously UPMC had plenty of access to this event information – it is self-insured by a health plan that it itself owns. All three of those mistakes are inexcusable in light of the fact that, by this point, everybody knows that you need to address them all to show valid results. Savings:  Also About Nothing Of course, UPMC also claimed to show substantial savings – who doesn’t? But the savings – according to UPMC's own article – could not have been because of the wellness program. The only three preventive care services that the participants consumed more of than non-participants were checkups, colon cancer screens and breast cancer screens. Checkups have no clinical value,  cost money and on balance may be slightly more likely to do harm than good. The intervals and start points for both colon and breast cancer screens have both been relaxed since this UPMC study was performed (2008 to 2011), because doing fewer was deemed by the U.S. Preventive Services Task Force to be a healthier idea than doing more, because of lack of efficacy and overdiagnosis/overtreatment potential and (in the case of colonoscopies) a risk of complications. In any event, whatever money screens save would be years off, as the idea is to find tumors early and spend the money now rather than later. So, screening people does not generate short-term savings and in fact costs money in the short term. Bottom line: This study did nothing – there is no credible source to attribute savings to, no appreciable risk reduction and lots of liberties taken in study design, and the most important analysis (for plausibility) was conveniently overlooked. Why did UMC even publish this, knowing that it was meaningless? Simple -- UPMC sells this stuff…and it is hoping your western Pennsylvania counterparts will sell it for them, using code language to make sure brokers know that sales come with commissions. Like every other wellness vendor, UPMC is hoping to entice you with those commissions. Like every other vendor, UPMC gives you a talking point, in this case a conclusion helpfully summarized on the first page, that “wellness programs are a useful tool in managing health and costs.” Yes, these programs carry commissions, and, no, they are not subject to the same commission disclosure requirements that you must make when selling health plan services. But if you’ve read this far into this posting it’s because you want to do what’s best for your clients, even if it means forgoing short-term commissions. In the long run, you are doing your clients much more good – and, not coincidentally, increasing your chances of keeping those clients – by selling them only the products that are best for them, a list of products that does not include workplace wellness overscreening programs like this one.