Cyber and Physical Threats Are Colliding

Over the next four years, the number of connected devices is expected to grow to as many as 50 billion, and the risks are becoming physical.

John Bruno
May 25, 2016
Image
Overview A quarter of a century after the Worldwide Web began to transform the Internet into the indispensable tool we all rely on today, we’re entering a new digital revolution. Over the next four years, the number of connected devices is expected to grow to as many as 50 billion, according to the 2015 Ponemon Global Cyber Impact Report sponsored by Aon. Business is expected to make up a far larger percentage of Internet of Things (IoT) usage than the consumer — IoT is more about smart factories and computer-controlled office systems than shiny gadgets like smart watches and fitness trackers. The risks are becoming physical. Some of these new devices could cause serious real-world damage. We’ve already seen manufacturing plants seriously damaged by cyber attacks and electricity grids and automobiles shut down by hackers. It’s only a matter of time before such threats become more common and more physically dangerous to both people and property. With the rise of new technology comes fresh opportunity for business — but also new risk. In the workplace, every new connected device represents a new link in the IT chain. With the age of the Internet of Things upon us, what are the new risks and what do business leaders need to know to be prepared? 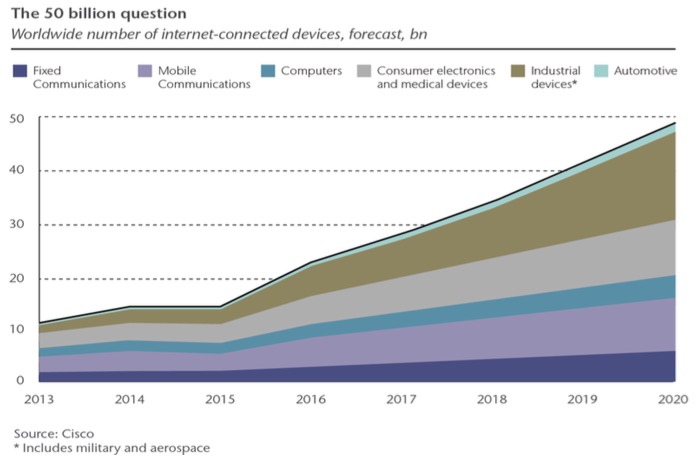 In-Depth New Technology, Big Opportunities  The benefits of Internet connections are hard to overstate. For businesses, the Internet of Things offers the promise of quantified everything. Employers will be able to track productivity and leverage metrics to uncover new efficiencies. With connected sensors underpinning every square inch of an organization’s footprint — once-siloed data sets can be integrated, correlated and cross-referenced — it will become easier to identify new efficiencies and deliver new value. See Also: Cyber Threats to Watch This Year The benefits are immense – but so, potentially, are the risks. “As we move into having smart workplaces and offices, you’re really talking about a technology backbone that’s driving an organization,” says Stephanie Snyder Tomlinson, a cyber insurance expert at Aon. “What impact can that have on a business? What are the potential losses to an organization if you have a network security breach that results in property damage or bodily injury?” Digital Threats Turn Physical An unfortunate side effect to some of the highest-profile recent cyber breaches is that many people have come to regard cybercrime as solely a privacy issue. It can be far more complex than that. “If there is a failure of network security or systems,” Snyder Tomlinson warns, “there could be a resultant business income loss. It could be intangible loss in terms of loss of data information assets or, especially as we move into relying more heavily on technology and the Internet of Things, it could be tangible loss, as well.” You don’t need to look very far to get a sense of the potential risks to property and other physical assets when the Internet of Things begins to help run a workplace. As organizations grow increasingly dependent on technology to run their businesses and offices, the attack surface for cybercriminals increases dramatically. Each new device represents an additional access point for hackers. The scenarios that could result can sound like something out of a science fiction film: These may sound far-fetched, but are already reality. A cyber attack on a German steel mill in late 2014 caused immense physical damage after hackers installed malware on the network. “It caused the blast furnace to be unable to be shut down, leading to massive property loss,” Snyder Tomlinson says. “The property loss arose from a network security breach. It’s a perfect example of the potential risks when you have companies that are relying on technology to run their business.” Understanding the level of risk “There’s always going to be some type of access point into a network, in one way, shape or form,” Snyder Tomlinson says. “You can have the best network security possible, but as everybody says, ‘It’s not if, it’s when.’” Consequently, many companies are revisiting their approach to cyber security. Organizations previously concerned only with safeguarding client privacy and personally identifiable information are suddenly contemplating a broader loss spectrum. “We’re seeing more interest in cyber insurance from manufacturers and critical infrastructure companies, because they recognize that their exposure isn’t necessarily just about private information or the liability arising out of a breach,” Snyder Tomlinson says. “We’re going to continue to see growth in the breadth of cyber coverage over the next several years, where we’re getting into the true property space, because there is the potential to have a property loss arising out of a network security breach or a systems failure.” Snyder Tomlinson says this is why businesses need to take a holistic view of their cyber vulnerability — “Cyber risk flows through an entire organization.” A good cyber risk management framework has three key elements, she says: With the rise of the Internet of Things, cyber crime is no longer simply about loss of information. Increasingly, you need to consider the possibility that cyber could be just as physically disruptive to your business as a natural disaster or a terrorist incident. This is no longer simply a data issue — today, property and, potentially, lives could be at stake.

How Startups Will Save Insurance

The evolution is unstoppable because innovation benefits both the insurance markets and the underlying consumer.

How Safe Is Your Data?

It may not be as safe as you think. Here are simple steps you can take to help keep your data more secure.

How to Counter Ransomware Surge

Companies can strengthen their defenses against ransomware attacks with good cyber hygiene and IT security practices.