Defending the Right to Bear...Toilet Lids

A crazy case of workers' comp fraud involving a local judge, a cemetery, painkillers and the lid of a toilet tank.

Bob Wilson
August 22, 2015
Image
You would think a judge would know better. But then again, because he was also the local cemetery sexton, perhaps he was too busy to educate himself on the finer points of law regarding workers' compensation fraud. A former Seneca County village judge has been convicted of falsely claiming two men attacked him outside his courtroom two years ago. A jury found him guilty of insurance fraud, falsifying business records, defrauding the government and falsely reporting an incident. The weapon he claimed to have been assaulted with? That would be the ubiquitous and sorely-in-need-of-regulating toilet tank lid. Yes, in what was sure to whip up a frenzy with the anti-toilet crowd, another seemingly innocent victim had suffered needless injury. Personally, as a pro-toilet guy, I feel compelled to urge calm and remind everyone that toilet lids don't kill people; people kill people. While there is no specific constitutional amendment that protects the right to bear toilets, I can state unequivocally that they are essential for both number one and number two. I sense I have strayed from my initial point. The judge told police in August 2013 that he was attacked from behind while locking up the Waterloo Village Court. He claimed to have been choked with something and hit over the head with a heavy object. Village police, using what can only be described as excellent police investigative techniques, found the shattered lid of a toilet tank at the scene. 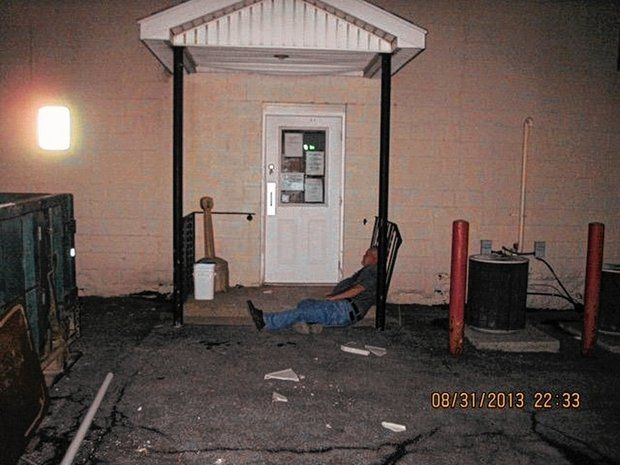 Photo by Seneca County District Attorney's Office Ultimately, however, a story emerged that made it appear our jaded jurist made up the affair as part of a nefarious scheme to obtain prescription painkillers through a workers' compensation claim. The district attorney who prosecuted the case said, "The jury heard evidence that this was a way for him to get a lifetime supply of painkillers." Can't argue with him there. If you are looking for a way to get an endless supply of top-grade narcotics, then workers' comp is where you want to be. We give that crap away like candy at Halloween. Perhaps the fact that this guy spent nine days on a pain pump at a Rochester hospital, while doctors and nurses testified he did not sustain any injuries whatsoever from choking, a blow to the head or any kind of assault, should have been a clue. I find myself asking, then, why the pain pump? But then I remember, "Ah, yes, this was a workers' comp case." Authorities report that the judge's medical records showed, prior to the bogus assault, he'd been on prescription painkillers for lower-back pain and for gout throughout his body. He also had 20 to 30 previous insurance claims for alleged accidents. The judge, who is not a laywer, had no known employment other than the acting village judge position -- except, of course, for his position as cemetery sexton, where he is under indictment for allegedly stealing gasoline from the village. Perhaps he needed it to pick up all those prescriptions. Honestly, we have a guy here who most likely has an obvious addiction problem and needs help beyond the two to seven years in prison he is currently facing. My bigger concern is the Waterloo village board. Despite the police department's determination that the judge's assault claim was false, the board re-appointed him to another term as acting village judge. Why they would do that is beyond my limited comprehension. The lessons here are twofold. First, and most importantly, toilet lids are safe when used by responsible adults. We do not need a plethora of restrictions and regulations just because one person abused them. Second, this village judge and cemetery caretaker might be a criminal and addict, but that does not make him stupid. That designation, it would seem, is reserved for the village board, which clearly has its share of idiots.

Bob Wilson is a founding partner, president and CEO of WorkersCompensation.com, based in Sarasota, Fla. He has presented at seminars and conferences on a variety of topics, related to both technology within the workers' compensation industry and bettering the workers' comp system through improved employee/employer relations and claims management techniques.

It's Termination Time; Send in the Clown

A man in New Zealand, called into a meeting where he knew he would be getting fired, used an unusual tactic for the event....

Time to Revisit the 'Grand Bargain'

Workers' comp is founded on the "grand bargain," yet few seem to remember what it is or why it was made. That's a big problem.

A Frenzy of Activity in Commercial Lines

What to Do About Rising Inflation?

Property-casualty insurers should stress test their operations and consider ways to counter potential inflation impacts on both sides of their balance sheets.