Grave Threat to the Electric Grid and the Internet

Severe solar storms known as a Carrington Event would cause trillions of dollars of damage -- and the next event is overdue.

John Chace
October 27, 2014
Image
On July 23, 2012, a plasma cloud of gigantic proportions raced toward Earth at nearly 2,000 miles per second, about four times the normal speed for a solar eruption. Had the gigantic cloud hit the Earth – as a similar eruption did in the mid-1800s – it would have devastated much of the world’s power grids and many satellites, taking down much of our telecommunications systems and GPS. The damage would have run into the trillions of dollars and would have taken months or even years to reverse. The good news: While the cloud passed through the Earth’s orbital path and hit Goddard’s Stereo A satellite, the cloud missed us. The bad news: Not by much. If the storm had happened just nine days earlier, the Earth would have been directly in its path. The worse news: We are overdue for a direct hit. Such huge storms are expected to hit the Earth every 150 years, and the last one struck 155 years ago. “Had [the 2012 magnetic storm] hit Earth, it probably would have been like the big one in 1859, but the effect today, with our modern technologies, would have been tremendous,” UC Berkeley research physicist Janet G. Luhmann said in March, when researchers from UC Berkeley and China reported their analysis. Daniel Baker, of the Laboratory for Atmospheric and Space Physics at the University of Colorado, said that, if the storm had hit, “we would still be picking up the pieces." A severe space weather event that causes major disruption to the U.S. electricity network and to communications would have obvious implications for the insurance industry. If businesses, public services and households are without power and, thus, many forms of communication, for a sustained period, insurers may be exposed to unprecedented claims for business interruption and many other issues. So, every insurer, broker and business that relies on the power and telecommunications grids – in other words, almost everybody these days – should consider space weather scenarios and start planning for them. We have some historical record of the devastation that would occur because, for five days beginning on Aug. 28, 1859, astronomers Richard Carrington and Richard Hodgson witnessed sunspots on the sun’s surface. The solar flare caused two major coronal mass ejections, or CMEs, which typically unleash energies equal to that of about a billion hydrogen bombs, according to scientists. One of these CMEs was so much more powerful than the norm that it traveled to Earth in 17.6 hours, while such journeys usually take three to four days. The huge storm – now known as a Carrington Event – caused major disruptions to the nascent telegraph system, and the effects continued into September. The New York Times reported on Sept. 5 that a telegraph operator by the name of Frederick Royce said, “My forehead grazed a ground-wire which runs down the wall near the sounder. Immediately, I received a very severe electric shock, which stunned me for an instant. An old man who was sitting facing me, and but a few feet distant, said that he saw a spark of fire jump from my forehead to the sounder.” As late as Sept. 19, the Gettysburg Compiler reported that a telegraph operator “chanced to touch the wire and was thrown in violence of a shock he received across the room.” Telegraph lines melted or suffered spotty service. “The French telegraph communications at Paris were greatly affected, and on interrupting the circuit of the conducting wire strong sparks were observed. The same thing occurred at the same time at all the telegraphic stations in France,” the Illustrated London News reported. The Philadelphia North American & United States Gazette noted: “The telegraph operators throughout the East report a very brilliant display of auroral light, which though very fine to look at, has as usual greatly hindered the transmission of messages over the wires.” If such a storm were to happen today, a study by the National Academy of Sciences calculates, the total economic impact could top $2 trillion. That would be 20 times the costs of a Hurricane Katrina. Huge power transformers, fried by a Carrington Event, would take years to repair. Lloyd's of London put the figure at as much as $2.6 trillion in a 2013 document called “Solar Storm Risk to the North American Electric Grid.” The effect of a Carrington Event would be so much greater today than it was in 1859 because we are so much more connected, supported by the electrical grid and satellites. The schematic of the U.S., below, highlights how New England, the Middle Atlantic, the Upper Midwest and the Northwest would feel significant fallout from a direct solar blast. The outlined sections indicate areas of probable power system collapses. Those areas are home to more than 130 million people. 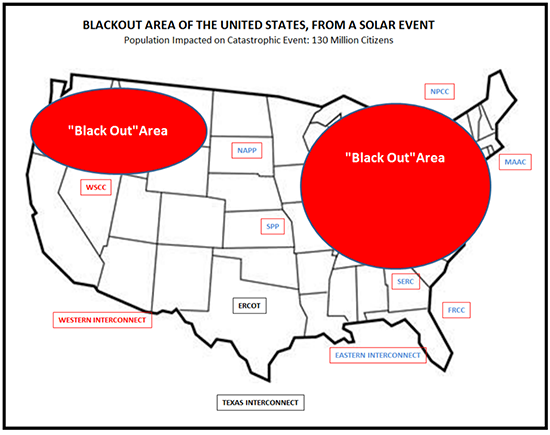 Our various infrastructures – i.e., electric power, transportation, water and banking – are intimately connected. That means that a serious impact on our power grid would unleash a domino effect on the remaining systems. This, in turn, would have a large effect each one of our daily activities. The Lloyd's of London study in 2013 concluded that: • A Carrington-level geomagnetic storm is practically inevitable. While the odds of an extreme storm is relatively low at any one time, it’s virtually inevitable one will occur eventually. Historical auroral records suggest a return period of 50 years for severe storms and 150 years for very extreme storms, like the Carrington Event. • The risk of intense geomagnetic storms is greater when we approach the peak of a solar cycle. Solar activity follows an 11-year cycle. For the current cycle, the geomagnetic storm risk is projected to peak in early 2015. • As the North American power infrastructure ages, the risk of a catastrophic outage grows with each solar cycle peak. The potential exists for long-term, widespread power outages. • Weighted by population, the highest risk of storm-induced power outages in the U.S. is along the Atlantic corridor between Washington and New York City. This takes into account risk factors such as magnetic latitude, distance to the coast, ground conductivity and transmission grid properties. Other high-risk regions are the Midwest states, such as Michigan and Wisconsin, and regions along the Gulf Coast. • The total U.S. population at risk of extended power outage from a Carrington-level storm ranges from 20 million to 40 million. The outages could last from 16 days to as long as two years. The duration of outages will depend mainly on the availability of replacement transformers. If new transformers must be ordered, the lead time is likely to be at least five months. • Storms weaker than Carrington-level could produce a small number of damaged transformers – from 10 to 20 – but the potential damage to densely populated regions along the Atlantic Coast is still significant. The total number of damaged transformers is less relevant for prolonged power outages – their concentration is what matters. The failure of a small number of transformers serving a highly populated area could trigger a prolonged outage. Insurers may want to consider scenario planning that looks at two issues, in particular, to be ready for a Carrington Event. First, they may want to examine the operational constraints that could occur – insurers, for instance, might be unable to receive premium payments or issue policies and invoices while addressing policyholder claims. Second, insurers may seek to assess their potential overall exposure to claims for business interruption or other losses that a Carrington Event could cause. Developing contingency plans for the possibility that a disaster will zap plants, buildings and equipment may also prove beneficial. This plan could focus on how companies might continue to operate even during a long-term interruption. This could include involving backup generators for critical systems, redundant computer systems and, for companies that are big enough, locations in areas that are less likely to be affected by a major storm and that can be staffed up in an emergency. It’s worth remembering that other companies will be scrambling to do the same thing – so options for relocating critical functions may be more limited in densely populated areas. Companies may look to engage their full risk-management expertise, including a discussion about business-interruption insurance. Directors and trustees likely need to devote particular focus, because of their positions of responsibility. And, if you’re in management, you may want to ask yourself: “Is our board informed about the risks of potential exposure to a Carrington Event, or something similar?” If not, it may be time to act. The materials referenced herein are prepared by the author and as such do not necessarily represent the views or opinions of OneBeacon Professional Insurance. OneBeacon Professional Insurance makes no claims concerning the completeness or accuracy of these materials and takes no responsibility for supplementing, updating or correcting such materials. This document is for general informational purposes only and does not constitute and is not intended to take the place of legal or risk management advice. Parties should contact their own personal counsel for any such advice.