How Much Does Health Care Cost? More Than You Can - or Want - to Imagine

What will it take to tame the monster? Each of us asking questions, pushing back on the system, objecting to outrageous pricing, and taking care of ourselves. Do your part: feed the Health Care Spending Blob a little less this month.

In my mind’s eye, I’ve started imagining U.S. health care spending as the Blob from the 1950s horror movie of the same name: the monstrous mass at the edge of town, consuming everything in its path. It’s expanding before our eyes, oozing all over the economy, threatening our future, and no one knows exactly how to stop it.

The other reason the Blob is a good analogy is that we no longer find it scary when there are many more modern, realistic threats (aliens, viruses, nuclear and chemical weapons) that worry us. The citizens in the movie weren’t frightened either, until it started eating them. So, after having a laugh and dismissing the Blob as a harmless story, imagine some ominous music in the background and a green, sticky substance oozing under your front door.

The Blob of health care spending continues to grow whether we acknowledge it or not. Despite recent news that our cost trend has slowed somewhat in recent years1 2 and hopes that reform will decrease costs (it won’t; early projections from the exchanges are 25% higher)3, health care spending remains one of the greatest threats to our national security and prosperity.

Unfortunately, there is neither political will nor industry incentive to limit the monster’s appetite. It is up to each of us to stop feeding its seemingly unlimited ability to consume budgets. First, let’s remind ourselves how big this monster has become and examine what we give up as a result.

How Big Is It?
The answer is that health care spending is now bigger than we can comprehend. Literally. The number is three trillion dollars per year4. That’s not a number most of us can grasp. One trillion equals one thousand billion. The idea that we are spending many times that number needs examples to understand.

Or: If we blink once every five seconds, it still would take 6,000 people living to 100 years of age to blink 3 trillion times.

More to the point, $3 trillion is almost $10,000 every year for every man, woman and child in the country.

Perhaps the most daunting part is that we spend that much each and every year, and the annual amount has quadrupled since 19905. Plus, health care now supplies one in nine jobs6. That means eight people do everything else, in every other job, in every other industry, for every one job in health care. The ratio is 8:1. Where will the ratio stop? 7:1? 6:1? Or will the Blob keep growing?

Compared To What?
From another perspective, let’s compare our health care spending with that of other countries. We spend 1.5 to 2 times as much of our Gross Domestic Product (GDP) (almost 18%) on health care than other industrialized nations, which average under 10%7. This means the Blob consumes one in every five dollars we spend on everything; a ratio of 4:1, four on everything else, one on health care. Other countries average 9:1. This means other nations can spend more on important investments, while we feed the monster. Even if we achieve a strong future economy, that disadvantage will be difficult to overcome.

Let’s also compare to spending on other national interests. Public medical spending now exceeds our budget for Social Security or Defense8, despite the amazing fact that the U.S. spends more on defense than the next ten highest-spending countries combined9.

Reading, Writing Or Ritalin®?
Most disturbing, the amount our government spends on health care has increased eleven times faster than education spending over the last 50 years, and we now spend 33% more on health care than education (8.2% of GDP versus 6%)10. This hasn’t been a conscious choice to put arrhythmia ahead of arithmetic, but that’s how the Blob works ... a slow advance, gobbling up resources. The trade-off may feed the hungry monster today, but at what cost to our global competitiveness in a future labor market? Remember this represents only public spending on health care, ignoring the 40% paid privately. 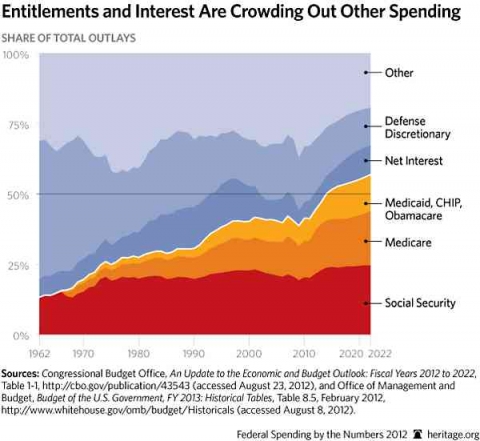 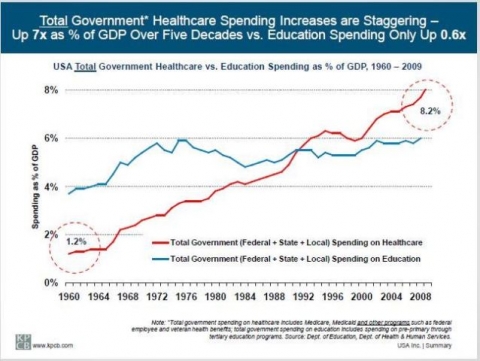 Each Of Us Feeds The Health Care Blob
Neither government nor medicine will save us from the extreme financial threat of health care. We have to do it ourselves.

Of course medicine (the so-called Medical-Industrial Complex that IS the Blob) will keep telling the public that they need more and better care; another surgery, another medicine, another exam will make us feel better. And of course that message makes us feel cared for and justified in our continued over-use of over-priced services. While someone else pays, we shrug and get another test, just to be on the safe side.

But the battle against the Blob can’t be won by asking the Blob itself to go on a diet, or asking legislators who are sponsored by the Blob to limit its consumption. And, like in the movie, the public doesn’t perceive the magnitude of the threat; until it may be too late.

What will it take to tame the monster? Each of us asking questions, pushing back on the system, objecting to outrageous pricing, and taking care of ourselves. Do your part: feed the Blob a little less this month.

This article was first posted on Altarum.org.

9Cory Booker says U.S. military spending is greater than the next 10-12 countries combined. The New Jersey Star-Ledger PolitiFact [Internet]. 2013 May 21, 2013.

One in four Americans is caring for a loved one with a debilitating illness or other special needs. COVID-19 amplified the problem, and it will continue to grow.