Careful carriers and unenthusiastic buyers mean that the part of the economy being insured just keeps getting safer. It's time for a rethink.

Chris Burand
January 8, 2020
Image
P&C insurance is becoming less important financially because the insured world is becoming safer. The safer the world, the less insurance people need to buy to protect them against losses. The less important any good or service is, the less valuable it becomes, and people will not pay as much for it. It is just simple economics. Before jumping to conclusions like most people do when I present these facts, it is important to understand the difference between the insured world becoming safer and the part of the economy that is not insured by private companies. In the U.S. (unlike some other developed economies), the government provides most flood insurance. A material portion of the population does not buy insurance, so they become part of the non-insured world. Many of the disasters you see on the news are not insured because people did not buy insurance for those catastrophes. Lots and lots of people may lose their homes to an earthquake or forest fires, but many of those people will not have insurance coverage for those types of events. In many cases, insurance coverage is not readily available so events become uninsured. The insurance companies have made the decision to only insure people and property they are confident they can insure for a profit. Many insureds have decided to forgo purchasing coverage for many kinds of risks because they are either too expensive to cover or, in consumers' minds, the risk is too small. What does get insured because of carriers' conservative approach and the insureds' cautious approach is the part of the economy that is becoming ever safer. If we're not careful as an industry, we will eventually have nothing left to insure. Here is the proof the insured world is becoming safer (all data is based on A.M. Best's latest Aggregates and Averages). The following two charts are for frequency, which is a better metric relative to whether more or fewer adverse insured events are occurring. For many reasons, severity may take a different path primarily because large losses tend to make up a larger portion of the remaining claims when frequency decreases. 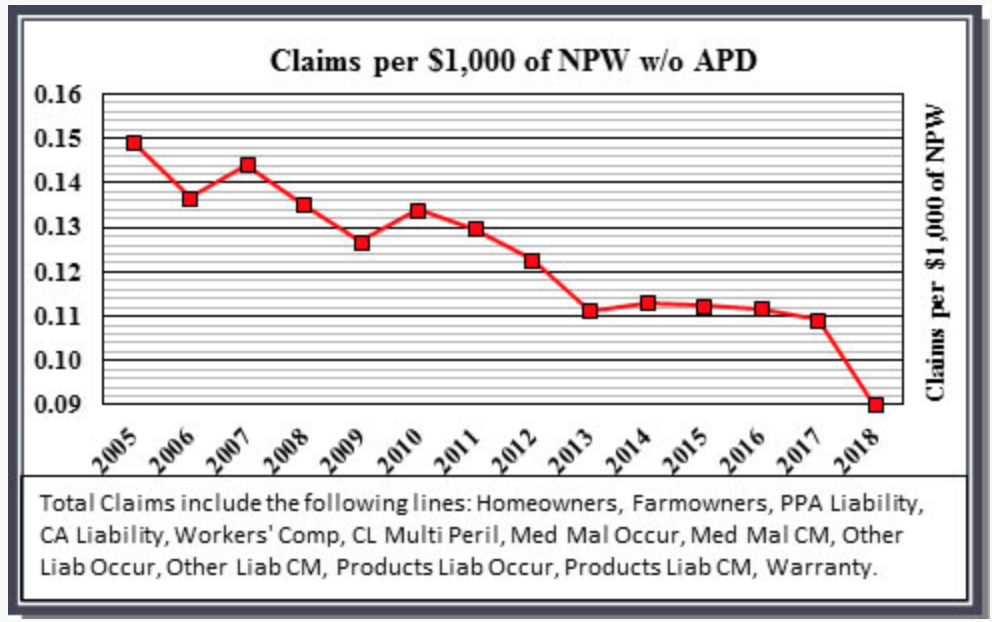 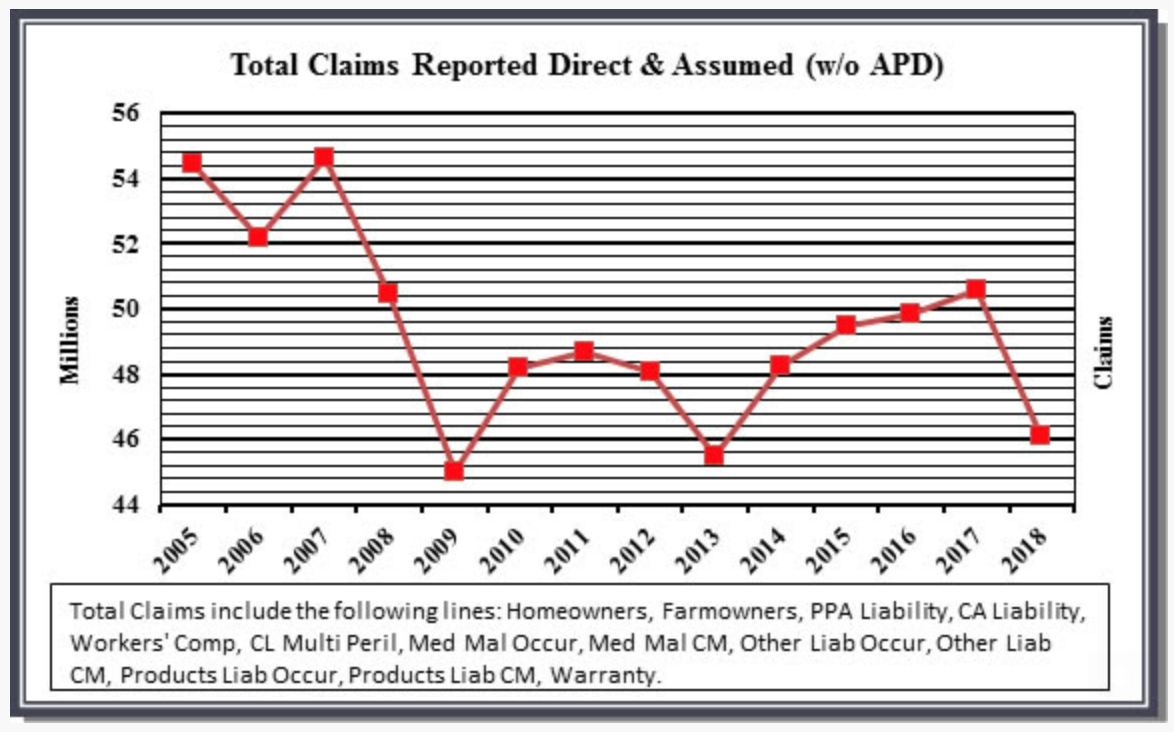 These charts exclude physical damage to autos because that one single line defies other trends. In other words, hail and flood auto claims are not becoming less frequent. The charts above do consider non-auto property hail claims, however, and, even with those claims, which include damage to hundreds of thousands of properties over the last few years (primarily in four states), the absolute number of claims is less. Considering that there are hundreds of thousands more businesses, people, homes and drivers, claims have decreased from around 54 million per year to, even in a cat year like 2017 (2018 numbers have not fully developed), only 50 million. The insured world is safer. See also: Road to Success for P&C Insurers   The chart below clearly shows that claims relative to GDP are in a steady decline. Even if auto physical damage claims are added to these charts, the overall trend does not change. The difference is that the steepness of the decline moderates. If it was not for severity increasing in pure dollar terms, which should be expected, the decrease would be even more pronounced. I do not have the definitive data, but my guess is the severity increase over the last three years is due to the hail storms and the horrible California fires. I can personally testify to hail claims totaling cars -- if you don't live in a severe hail state, it is difficult to appreciate the damage a hail stone the size of a golf ball, much less a tennis ball, can do. The increasing safety of the insured world is a threat to carriers' and agents' existence because the problem is likely to grow. The safety improvements in vehicles, blue collar work environments and, perhaps especially, water shut-off devices, along with technology that will reduce exposures, means insurance will become even less valuable soon. 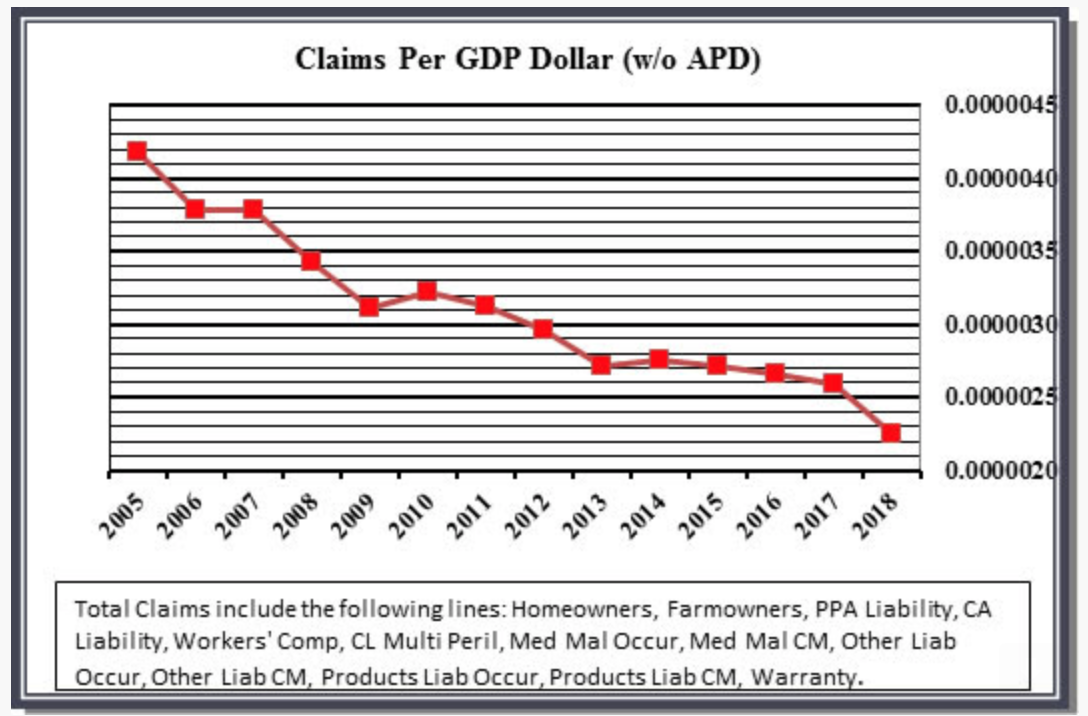 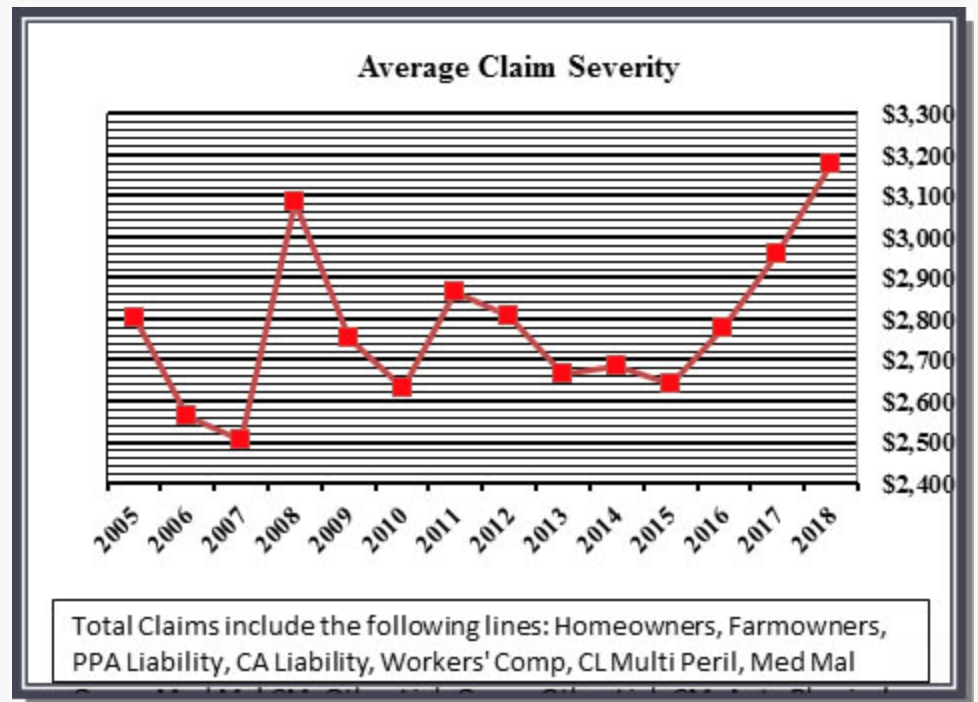