Understanding the true inflation of medical care will help the intelligent, educated producer sell and advise the educated and intelligent buyer.

Chris Burand
January 21, 2020
Image
The chart below compares the government's Bureau of Labor Statistics' inflation calculations for Medical Care versus the Kaiser Family Foundation's research into how much insurance premiums have been increasing. The differences between the two calculations are huge. From 1998 - 2018, the government estimates that health costs have increased by 107%, but for some reason insurance premiums have increased 288%. In fact, 288% is a material understatement because that figure does not include the huge increases in deductibles. 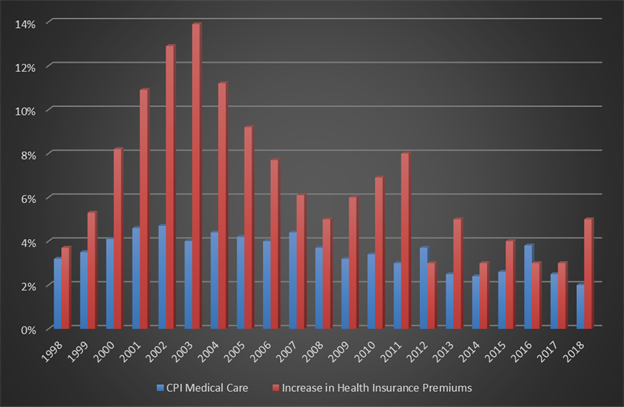 One might say, "Well, this means the insurance companies are overcharging!" That is a possibility, but if the insurance commissioners of America are that bad at reviewing rate filings, which I doubt, then all the insurance commissioners and their staffs should be replaced ASAP. Another reason I don't think the difference can be accounted for by declaring insurance companies are grossly overcharging is that between the combination of the ACA, which to some degree limits their profit margin, and a review of their financials, their profit margins do not suggest this level of overcharging. Another perspective is that government-sponsored healthcare expenses do not increase nearly as much as the costs covered by insurance companies. Medical care is medical care, unless if under government programs patients get materially less care or the insurance companies subsidize government programs by overcharging everyone who buys their own insurance. A third alternative is that the Bureau of Labor Statistics' numbers are just plain wrong. I trust the Kaiser numbers because they are associated with Kaiser Permanente Insurance, so they know what premiums are being charged. Premiums are easier to verify, too. See also: The Science That Is Reinventing Healthcare   In your day-to-day world, what difference does all this make? Maybe none except by adding to your humor or frustrations. Or, perhaps it adds to your conspiracy theories. In selling benefits, though, I think it helps the intelligent and educated producer sell and advise the educated and intelligent buyer. Understanding the true inflation of medical care will help people make better decisions.